It’s been close on 5 months since the last post, so I should have something to write about!

Since the last post the last set of wheels were sold through eBay, and another set were bought on a family trip we did to the USA, these ones actually look much better I think and the main thing is they fit!

The fronts are 18”x9.5” and the rears are 19”x11” which is 1” wider at the front that I wanted but without spending at lot of money for custom wheels you gets what’s on the shelf!  Also the rears have 10mm more offset in them that I was hoping for, so the clearance is tighter to the rear shocks than I’d like.  On the other hand the plan is to use a 285 rear tyre which is narrow of an 11” rim, hopefully it won’t be an issue, I guess in time I’ll find out.

And at the front…

Note calliper on wrong side.

Also you may notice some of the parts have been painted.  I’ve used the KBS coatings Rust Seal paint which is bizarre stuff to use, but apparently very tough once applied.  I’m not happy with the finish achieved on the parts to date, it is apparently possible to brush the stuff on and it should self level etc.  So far I’ve not been able to get the stuff to look nice, having said that it was 40c+ when I was doing this so that might have had an impact on the result.  The intention is to spray the next batch and see if the result is any better.

Next, the steering rack extensions have been completed, the hardest part of this was getting the 14×1.5mm die which took weeks to get hold of.

Then there’s been the 40 yes 40! little spacers turned up for the top wishbone inner joints and for the damper ends.  Aluminium would have been lighter but I’d did these in stainless steel out of preference.

The old square harness tubes have been removed and replaced with 38×2.5mm tube to wrap the belt around as per the previous post

I’ve also got the shifter design basically done, I went and got the parts laser cut, now I need the bearing etc to assemble it.  This is the design in place, the supporting frame work is not yet thought out.  I wanted the shift lever relatively close to the steering wheel to reduce the hand movement required. 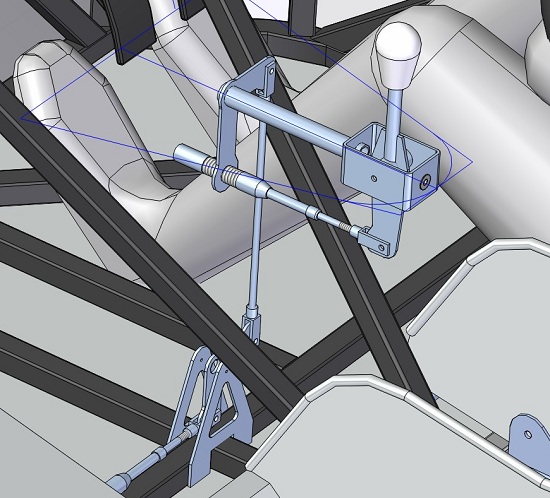 Also laser cut were the brackets for the toe control links and some big numbers for the front of the house!